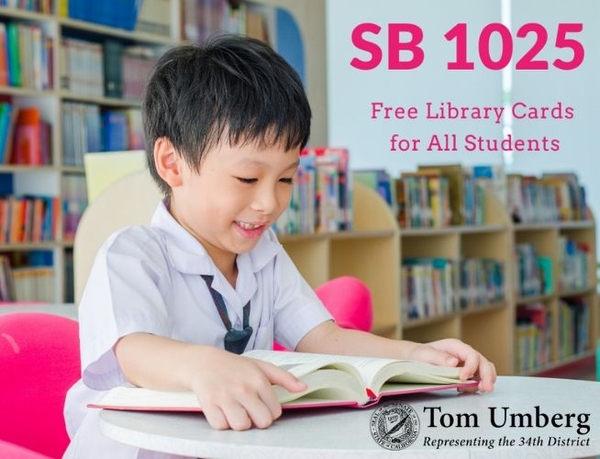 “In today’s media market, images, headlines, and stories reach people at an astounding speed – so it’s more important than ever that we, as policymakers, ensure that disseminated information is factual and supported by empirical evidence. As we have learned in recent years, the internet is not the best arbiter of truthfulness,” noted Senator Umberg.  “We have worked hard to create this information economy. We owe our children the ability to wade through the morass by learning effective research and study skills – unfettered access to our public library systems is a relatively easy way to accomplish this.”

The mission of public libraries in California is to provide free and easy access to information, ideas, books, and technology that can help to enrich, educate, and empower the lives of every individual.  Unfortunately, a December 2016 Pew Research Center poll found that a large majority of American adults believed that false and made-up news has caused a great deal of confusion about the basic facts of current events.  As a result of this and similar studies, the American Library Association passed a Resolution on Access to Accurate Information at its 2017 Annual Conference.

Under the leadership of President Barack Obama, the White House launched the ConnectEd Library Challenge in 2015, in which libraries and schools are encouraged to build partnerships to ensure that every child receives a library card.  In 2016, under the direction of Los Angeles Mayor Eric Garcetti, the Los Angeles Unified School District entered into a Memorandum of Understanding with the City of Los Angeles’ Board of Library Commissioners to provide every student with a Student Success Library Card.  As a result, the second largest school district in the nation has provided free library cards to 800,000 students in California.  Similar programs have also been implemented in Nashville, Tennessee; Lexington, Kentucky; Santa Barbara, California; and a few other cities.

“Wherever you are, whoever you, however old you are, every student benefits from having a public library card. It’s a key not just to success in school but in life,” said Greg Lucas, California State Librarian.

“As Sen. Umberg says, putting a library card into every student’s hands not only helps close the opportunity gap but -- for a modest investment of mostly time and energy – returns huge dividends in helping California’s next generation of innovators and entrepreneurs achieve their goals.”

"The Los Angeles Public Library's Student Success Card has been a game changer for many Angelenos," said City Librarian John F. Szabo. "Our program ensures that every child in the nation's second largest school district has access to all of our amazing digital resources as well as the collections and services in our neighborhood libraries. This kind of exposure sparks a lifelong relationship with the library."

According to the American Library Association, librarians in public and academic libraries across the country answer nearly 6.6 million questions every week on everything from book recommendations to computer and internet training, job searches, and government forms. Furthermore, libraries play an important role in early childhood literacy with research showing that reading actually aids in brain development, especially in a child’s first five years of life.

SB 1025 will likely be heard in in the California State Senate in mid/late March.